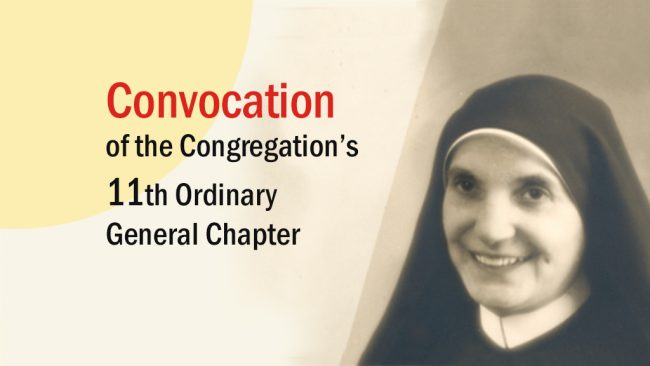 Anniversary of the birth of Ven. Thecla Merlo

To the Circumscription Superiors,
Superiors of the communities
dependent on the General Government
and all the Sisters

On the day on which we celebrate the 125th anniversary of the birth of Maestra Thecla, I want to give you some information about a very important appointment in which we all feel deeply involved: the convocation of our 11th General Chapter.

We have already traveled a sizeable piece of this road together. Since my first circular letters (2 January and 28 February 2018), in which I announced the theme of the Chapter and set down several concrete guidelines concerning the way to prepare for it, several important stages of our journey have been realized:

Some sisters on the Pre-Chapter Commission, accompanied by the facilitator, Claretian Father Cristo Rey Paredes, are already working on the General Chapter’s Work Instrument as a result of the entire Congregation’s involvement in it. This Instrument will be sent in due time to the sisters who will be participating in the Chapter so that they can study it, and some copies will be sent to our communities by way of information.

official convocation
of the 11th Ordinary General Chapter
of our congregation

The General Chapter is the supreme authority of the Congregation, exercised in a collegial and temporary way, in accord with the Constitutions, which list its purposes as follows (cf. Const. 165):

Participants    60 sisters will participate in the Chapter:

20 by right (the ex-superior general is also a provincial superior), and 40 by election.

With regard to the sisters participating by election:
22 were elected by our provinces
16 by our delegations
2 by the communities directly dependent on the General Government (see Attachment).

Language       The official language of the Chapter, in which every document will be drafted, will be Italian. Simultaneous translation services will be provided for the sisters who need it.

The Constitutions invite us to nourish a climate of profound prayer, which the entire Congregation is asked to cultivate in this time of proximate preparation for the Chapter (cf. Dir. 166.2).

I would like to underscore here several moments and expressions of this prayer to live together:

In the coming months, we will enrich the Reserved Area of our website (www.paoline.org) with more content and documents useful for deepening the Chapter’s theme. We will also prepare the website of the 11th General Chapter.

A time of more profound reflection and listening is beginning for all of us: a time in which to grasp the will of the Lord and identify the paths that can “make dreams sprout, arouse prophecies and visions, make hope flourish, stimulate trust, bind wounds, weave relationships and resuscitate a dawn of hope” (Pope Francis).

May the Spirit reawaken our hearts, make us capable of docile listening and discernment, broaden our horizons and give us a vision of the future brimming over with the joy of the Gospel.

With profound affection and remembrance of you in prayer,

Attachment: List of the participants in the 11th General Chapter